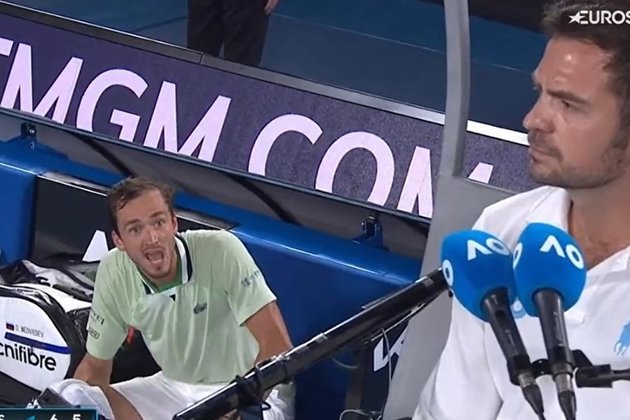 Daniil Medvedev went on the rampage at the Australian Open as the Russian second seed unleashed a verbal volley at the chair umpire over claims that Greek rival Stefanos Tsitsipas was breaking the rules by receiving mid-match coaching.

After taking the first set of their semifinal in Melbourne, Medvedev was on course to drop the second after being broken twice by Tsitsipas - a rival with whom he has a tense history after previous on-court clashes.

That track record of animosity took a new turn on Friday at Rod Laver Arena as Medvedev exploded at match umpire Jaume Campistol, claiming that Tsitsipas was receiving coaching from his father in the stands - which is against the rules.

"His father can talk every point. Are you stupid?" Medvedev screamed.

"Oh my God, how can you be so bad in the semifinal of a Grand Slam?" Medvedev raged.

"What do you want?" Campistol replied.

"To give him coaching [violation] because his father is talking every point," Medvedev yelled.

Fourth seed Tsitsipas served out the set to level things up at 1-1 amid the explosive scenes, but the Greek did receive a time warning for his slow play.

Medvedev stormed off between sets for a change of clothing, appearing to call the umpire "a small cat" along the way as the Russian aims to reach a second successive final in Melbourne.

The 25-year-old Medvedev is the reigning US Open champion and could become the first man to follow up a maiden Grand Slam title with victory on his next appearance at a Major.

Earlier on Friday, Rafael Nadal booked his spot in Sunday's Australian Open final with victory over Matteo Berrettini, as the Spaniard eyes what could be a record 21st Grand Slam title.