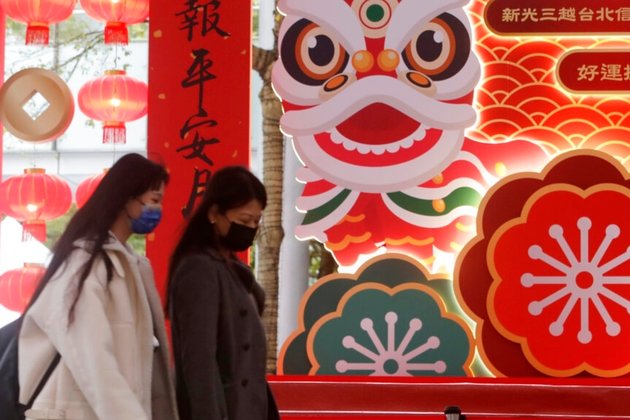 TAIPEI - Many in Taiwan do not see parallels between Russia's threats against Ukraine and their situation with China. Instead, much of the concern in Taiwan has focused on whether their closest ally, the United States, would become distracted by Europe or act in bad faith toward Ukraine -- hinting at how Taiwan might be treated one day.

"I think people in Taiwan, or people that I am closest to, they haven't expressed any concerns regarding the issues of a Russian possible invasion in Ukraine. They have mentioned briefly saying that the crisis in Europe is worsening, but they've kept it quite vague," said Daniel Ha, who helps manage a co-working space in Taipei.

"I think people are always concerned about [whether] China could use this opportunity to flex its muscles again or move forward with their plans of unifying Taiwan," he said. "I personally am concerned that it would be a big distraction if the West began a full-blown invasion trying to protect Ukraine. Taiwan could easily be sidelined.'

Syrena Lin, who works at a headhunting firm in Taipei, told VOA that while she was following the conflict in Ukraine, she had also not found much discussion of it in her daily life.

"I don't think Taiwanese people are really treating this as a big deal, especially as I have a lot of friends in politics and I don't really see any discussion among them," Lin said.

"I am interested in this issue, and I care about how it's going because the U.S. and China are both involved in it," she added. "I think China is watching how the U.S. is reacting to military offensives and maybe China will take it as an example to how the U.S. would react when China really [attacks] Taiwan one day."

Taiwan's government has expressed similar sympathetic but measured views about Ukraine. Ministry of Foreign Affairs spokesperson Joanne Ou said in a statement that Taiwan was "concerned about the current situation of Russia-Ukraine relations" and called for dialogue as soon as possible.

One reason for the relative distance may be that many Taiwanese - including young professionals like Ha - see more distance between themselves and China than between Russia and Ukraine, who were united for much of modern history by the Russian Empire and then the Soviet Union.

A tiger effigy is placed at a Taoist tiger temple to mark the upcoming Lunar New Year of the tiger in New Taipei City on Jan. 28, 2022.

'Communist China has never ruled Taiwan officially or ever," Ha told VOA, adding that the last time Beijing direct controlled Taiwan was in the 19th century.

'It was Qing dynasty that predated the Japanese colonial period so if you're talking about historical facts, the Chinese Communist Party doesn't have a right to claim Taiwan," he said.

Ha said some Taiwanese may disagree with his view, particularly those who are descended from Chinese emigres to Taiwan in the 1950s after the end of the Chinese revolution, but their numbers are also waning with demographic shifts and the rise in Taiwanese nationalism among young people.

His feeling were shared by other Taiwanese, such as Kuan-ting Chen, CEO of the think tank Taiwan NextGen Foundation, who also found Ukraine and Taiwan to be a "false comparison" because of vastly different historic and logistical factors.

Chen said there are few geographic obstacles for Russia to invade Ukraine, but Taiwan has notoriously difficult geographical defenses like the 130-kilometer Taiwan Strait that would be a "nightmare" for China -- at least for the next few years until the People's Liberation Army completes a major modernization program.

China and Taiwan have had three close calls in the past that could have led to military conflict, although the last time China came close to landing on Taiwanese soil was in the 1950s. The most recent conflict was in 1996 when China fired missiles in the direction of Taiwan, but since then it has focused primarily on "grey zone" tactics such as flying military planes in the direction of Taiwan to erode morale.

Ukraine: What We Know

For those who are closely watching the conflict in Ukraine, most of their focus has instead been on how the U.S. will respond, said Kwei-Bo Huang, an associate professor in diplomacy at National Chengchi University in Taiwan. The U.S. withdrawal from Afghanistan in September raised uncomfortable questions in Taiwan about whether Washington might abandon another long-time ally, and the Ukraine conflict could resurrect many of these concerns.

"I can sense that in Taiwan, those having some knowledge of the Ukraine-Russia case are waiting to see whether the U.S. will fulfil its commitment to Ukraine and make more direct and strong responses to Russia's threat of use of force. If the U.S. doesn't do so, then the U.S. commitment to Taiwan in accordance with the Taiwan Relations Act will be doubted (again) by many in Taiwan," he said by email, citing a major piece of U.S. legislation.

In the 1979 Taiwan Relations Act the U.S. has pledged to help Taiwan to defend itself against an attack but that does not guarantee that it will provide military assistance.

Many Taiwanese are also aware that while the U.S. and Taiwan have recently grown closer under the presidencies of Donald Trump and now Joe Biden, U.S. interest in the East Asian democracy has fluctuated over the decades.