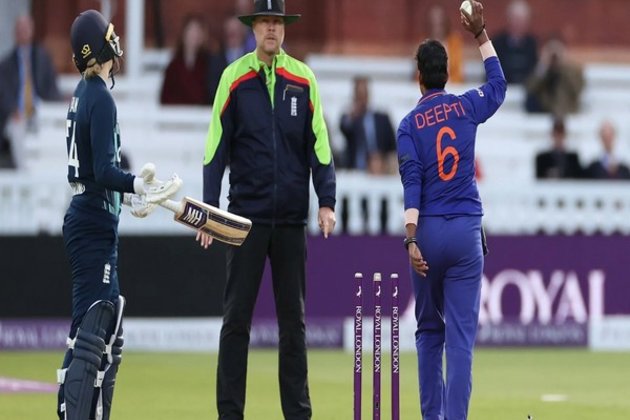 London [UK], September 25 (ANI): Deepti Sharma's act of 'mankading' England's Charlotte Dean has left cricketers and fans divided, with some coming in support of the all-rounders' 'win at any cost' attitude, while some are slamming her for breaking the 'spirit of cricket'.

What is causing this outrage? What is causing an equally huge outpouring of support? Let us have a look at origins of this controversial mode of sending batters back to pavilion and its status within the sport and its laws.

Sometimes, the batter at the non-striker's end leaves his popping crease while the bowler is in his/her final delivery stride. If a bowler sees this, he/she can legally attempt to run out that batter as per the laws of the sport.

This was first done by Indian cricket legend Vinoo Mankad during 1947-48 during India's tour of Australia by running out Australia's Bill Brown at the non-striker's end, which earned it the name 'Mankading'.

Since then, there have been a total of 11 'mankads' in international cricket and at least 50 across all levels and formats of cricket.

Many cricketers argue that it is against the spirit of the game, which lays emphasis on being fair, positive, self-disciplined and respectful of all, especially authorities like umpires. But it is legal as per the laws of the sport.

As per Law 41.16.1 (Unfair Play) of Marylebone Cricket Club (MCC) Laws of Cricket , "If the non-striker is out of his/her ground at any time from the moment the ball comes into play until the instant when the bowler would normally have been expected to release the ball, the non-striker is liable to be Run out. In these circumstances, the non-striker will be out Run out if he/she is out of his/her ground when his/her wicket is put down by the bowler throwing the ball at the stumps or by the bowler's hand holding the ball, whether or not the ball is subsequently delivered."This law has been put in place to keep the batters inside the crease and prevent the unfair, easy stealing of singles by leaving the crease early before a ball is even bowled.

But many cricketers have voiced out their opinion against 'mankading', especially after Indian spinner Ravichandran Ashwin dismissed Rajasthan Royals batter Jos Buttler in a similar fashion during IPL 2019 while playing for Punjab Kings.

Back then, Jos Buttler's teammate and former England skipper Eoin Morgan had blasted Ashwin for it, tweeting, "I can't believe what I'm seeing!! @IPL Terrible example to set for young kids coming through. In time I think Ashwin will regret that."Late Australian spinner Shane Warne had also lashed out at Ashwin, tweeting, "So disappointed in @ashwinravi99 as a Captainas a person. All captains sign the IPL wallagree to play in the spirit of the game. RA had no intention of delivering the ball - so it should have been called a dead ball. Over to u BCCI - this a not a good look for the IPL."Former English skipper Michael Vaughan had also tweeted, ""If @josbuttler had been warned well that's fine ... if he hasn't and it's the first time I think @ashwinravi99 is completely out of order ... watch how often this happens from now on !!!!!!! IPL."But Ashwin received support from the likes of former Australian players Mitchell Johnson and late batting great Dean Jones.

The situation is not too different for Deepti. She has been received support from Indian/Foreign players like Virender Sehwag, Wasim Jaffer, Tabraiz Shamsi (South Africa), Monty Panesar and Alex Hales (England), Ravichandran Ashwin. But notable English players like Stuart Broad, Nasser Hussain, James Anderson and Sam Billings have voiced out their opinions against Deepti's act.

So what is the status of mankading within the sport of cricket currently?The act is completely legal within the laws of the sport. But many deem it to be unfair and against the spirit of the game, which is also reflected in criticism by players mentioned above. But from October 1, 2022 onwards, this mode of dismissal could gain some more normalcy and garner less controversy in the near future as International Cricket Council (ICC) announced on September 20 that from October 1 onwards, mankading will move from Law 41 (Unfair Play) to Law 38 (Run out) section as per updated playing conditions. (ANI) 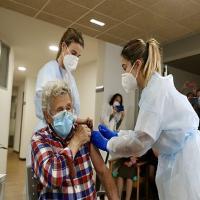